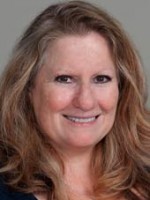 Raised in Hampton and a graduate of Hampton High, Cox has been practicing as a physician assistant for 35 years. She began her career in developmental pediatrics as part of a multi-disciplinary team at University Hospital of Jacksonville, Fla., and followed that with stints in general pediatrics in Nashville, Tenn., and rural pediatrics in Appalachia in Pineville, W.Va.

In 1992, Cox started working in pediatric orthopedic surgery at CHKD, from where she was recruited as a faculty member at the new masters physician assistant program at EVMS. She taught and recruited students at EVMS for five years.

Missing her family in Colorado, Cox relocated to Colorado Springs at the foot of Pike’s Peak and practiced travel medicine throughout Colorado and Arizona until joining the U.S. Army medical team as a pediatric hospitalist at Ft. Carson in 2012.In 2014, she was one of the first PAs in the U.S. to earn a Certificate of Added Qualification (CAQ) in pediatrics.

She recently returned to Virginia Beach to join the pediatric team at CHKD in the new urgent care centers.
Cox has been published in the AAP Healthy Choices newsletter and the AAPA Physician’s Blog. She has also presented at the Association of Physician Assistant Programs in Nashville.

Her dog Clarence is the subject of two children’s books Cox has written. She has a wide variety of interests, including traveling the world, doing medical missions to Ethiopia, Rwanda, India, and Vietnam, church fellowship, and cooking.