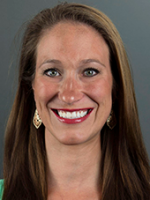 Pitzer, a Michigan native, completed specialty training in neurosurgery at Henry Ford Hospital in Detroit and began her career with Sentara Medical Group’s neurosurgical specialists after moving to Virginia Beach with her husband, who is in the military.

She has also worked in emergency medicine.

Pitzer’s deep interest in medicine stems from her childhood when she was diagnosed with Kawasaki disease and later idiopathic thrombocytopenia. While hospitalized around the age of 7, one of the rounding physicians asked if she understood what was wrong and drew a stick figure on white board. The doctor diagrammed an “autoimmune” reaction using “soldiers” as white blood cells as a defense mechanism and referring to them as being sick and confused. Instead of protecting her body, the soldiers thought her body was the enemy and attacked.

Because of that moment, she has hoped to always be able to explain medicine to every single patient on a level they can understand.

During her free time she enjoys spending time outdoors with her husband, daughter and two dogs.