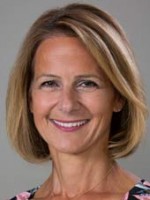 Dr. Arzubi-Hughes has had a wide variety of international and national experience since she was born.  She grew up speaking Spanish at home – her parents immigrated from Argentina – as well as German. Dr. Arzubi-Hughes grew up in Boeblingen, Germany, for six years and went to German school during her formative years before returning to the United States and completing high school in Vermont.

Her love of travel and desire to learn about the world led her to cross the United States and attend University in California.

While at the University of California-Berkeley, Dr. Arzubi-Hughes was on the varsity crew and was invited to try out for the 1996 U.S. Olympic Team. During the years between her undergraduate and graduate training, she dedicated two years in the Peace Corps, teaching health and physical education to secondary school children.

She followed that with research in biochemistry at a pharmaceutical company while an interpreter at Yale New Haven Hospital.

She then discovered her love for taking care of patients, and dedicated her life to medicine. At New York College of Osteopathic Medicine, she dedicated an extra year at medical school and became a fellow in osteopathic manipulative medicine.

Her outside interests include singing, windsurfing, triathlons, hiking and her family.