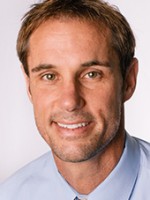 Dr. Reifschneider is a fellowship-trained pediatric endocrinologist and assistant professor at Eastern Virginia Medical School. He is a community advocate in the areas of diabetes and health awareness.