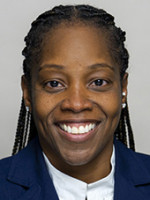 She completed her bachelor’s degree of science in nursing at Norfolk State University in 2010 and then worked as a psychiatric nurse at Virginia Beach Psychiatric Center.

Robinson-Baxter grew up in New York and moved to Virginia in 2000. She has two children and a Yorkie. She enjoys bike riding, singing, and reading.