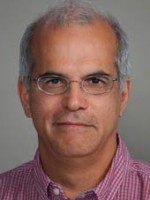 As a clinically focused neonatologist, Dr. Khan has always been interested in ways to improve care of the babies in the NICU, and after their NICU stay. Surfactant was still an experimental drug when he arrived at CHKD in 1988. Dr. Khan championed CHKD’s participation in a “late Phase 3” trial that allowed CHKD to treat over 100 babies who otherwise could not have received this life-saving medicine. Dr. Khan also assumed the role of the director of the neonatal follow-up clinic and with a dedicated team was able to expand the clinic, taking it “on the road” to the Eastern Shore twice a year.

Dr. Khan has been drawn to looking at the complex issues of how doctors and nurses and parents make difficult decisons in the NICU, and in the delivery room, especially with extremely premature babies. He has been on the CHKD bioethics advisory committee for over 20 years and has sought extra training in ethical issues.

Dr. Jamil Khan receives the 2018 Svinder Toor Award for out-standing leadership and service by a faculty member. This is an annual award presented by CSG.