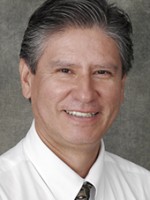 Dr. Chocano practiced in a private setting until he joined CSG in 2005. Dr. Chocano was drawn to CHKD because of its great reputation in the community and the fact that the hospital cares for thousands of sick and injured children each year. CHKD’s commitment to providing health education to the population it serves, as well as healthcare providers and students, also appealed to Dr. Chocano. He emphasizes the importance of nutrition, exercise, sleep and mental hygiene in the prevention and management of chronic respiratory disorders.

Dr. Chocano served as chief resident at Children’s Medical Center at Brooklyn in 1993. He served on the board of Berks County Hispanic Center and adviser of the Exeter Township Library Project.

Dr. Chocano currently has a faculty appointment at EVMS, is a member of the American Thoracic Society and a fellow of the American Academy of Pediatrics. He is a native of Lima, Peru, is married and the father of three.

Founder of iSLEEP, a sleep education and awareness initiative that partners with the medical and general community.

Supporter of the Chesapeake Arboretum and ForKids Inc.