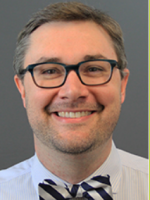 American Board of Psychiatry

Keck School of Medicine at University of Southern California

Dr. Spencer grew up in upstate New York, the youngest of four brothers. While there were no doctors in the family, his parents encouraged him to follow his interests. In school, that meant many science, math, Latin and Ancient Greek classes in high school and college.

After playing water polo at Brown University and making many trips to California with the team, Dr. Spencer was drawn to the west coast for medical school at Keck School of Medicine at the University of Southern California.

He returned to Brown University for a residency at Rhode Island Hospital and most recently served four years as co-director of the inpatient integrated medical psychiatric program at Hasbro Children's Hospital in Providence, R.I.

Dr. Spencer enjoys working with families and getting to know how each approaches issues that come up.

He and his wife have three children.