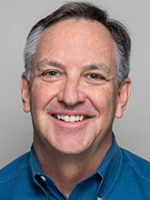 Dr. Upham brings with him 20 years of clinical experience from around the country. Born and raised in Los Alamos, N.M., Dr. Upham attended the University of Texas and graduated with high honors in mechanical engineering.

As an engineer, he worked for the Los Alamos National Laboratory where he earned a patent for one of his inventions. He then worked for several privately owned companies, but the profession left him feeling unfulfilled. He realized he was meant to follow in the footsteps of his grandfather and devote himself to medicine.

The year 2020 brought about a lot of changes for everyone. Coming to CHKD offered Dr. Upham the opportunity to once again serve at one of the best free-standing children’s hospitals in the country. Dr. Upham brings his broad range of medical experience from the Rocky Mountains of Salt Lake City, the high desert of Albuquerque, the borderland of El Paso, and the urban landscape of Philadelphia to CHKD. Apart from work, Dr. Upham loves the beach, to hang out with family, listen to rock music, swim, hike, mountain bike. He also enjoys reviving and restoring old pinball and arcade machines. Favorite band? Foo Fighters. Favorite food? Breakfast burrito, red and green chili. Fun fact? Held a state swimming record for 27 years.