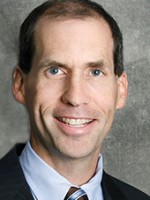 Dr. Siegfried began his medical career with the Navy and was assigned to Portsmouth Naval Hospital while on active duty.

After completing his military service, he feels fortunate to have been able to stay in the Hampton Roads area and continue his medical career with CHKD.

Teacher of the Year, June 2007: Awarded annually by Naval Medical Center Portsmouth Pediatric Residents in recognition of commitment to teaching